Suppose you’re an engineer at Spotify and you’re on a mission to create a feature that lets users explore new artists that are similar to the ones they already listen to. The first thing you need to do is represent the artists in such a way that they can be compared to each other. You figure that one obvious way to characterize an artist is by the people that listen to it. You decide that each artist shall be defined as a set of user IDs of people that have listened to that artist at least once. For example, the representation for Miles Davis could be,

The number of elements in the set is the number of users that have listened to Miles Davis at least once. To compute the similarity between artists, we can compare these set representations. Now, with Spotify having more than 271 million users, these sets could be very large (especially for popular artists). It would take forever to compute the similarities, especially since we have to compare every artist to each other. In this post, I’ll introduce a method that can help us speed up this process. We’re going to be converting each set into a smaller representation called a signature, such that the similarities between the sets are well preserved.

I think working with tiny examples to build intuition can be an excellent method for learning. In that spirit, now consider a toy example. Assume that we only have 3 artists and we have a total of 8 users in our dataset.

The goal is to find similar artists, so we need a way to measure similarities between a pair of artists. We will be using Jaccard similarity, it is defined as the fraction of shared elements between two sets. In our case the sets are user ids. All we have to compute is how many users each pair of artists share, divided by total number of users in both artists. For example, the Jaccard similarity between \(\text{artist}_1\) and \(\text{artist}_2\):

Similarly for the other pairs, we have:

A few key things about the Jaccard similarity:

Let’s unpack the second one, because it’s definitely the most important thing to know about the Jaccard similarity.

Intuition behind the Jaccard similarity

For some people (present company included), visual explanations are easier to grasp than algebraic ones. We’ll briefly shift our view from sets to Venn diagrams. Let’s imagine any two artists as Venn diagrams, the Jaccard similarity is the size of the intersection divided by the size of the union: 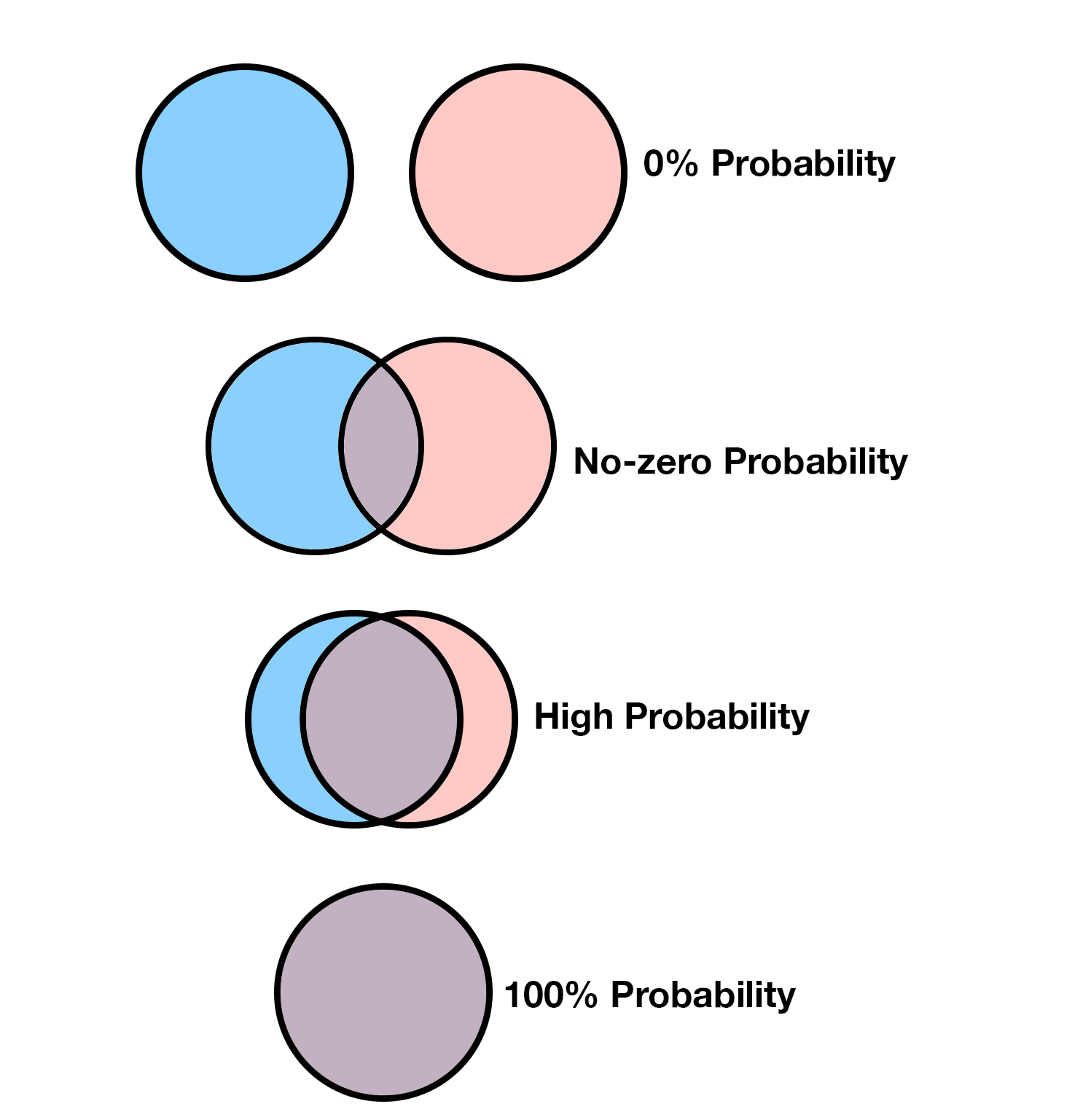 Consider another scenario. Suppose you want to know the similarity between two sets, but you can’t see the diagram, you’re blindfolded. However, if you throw a dart, you do get the information on where it landed. Can you make a good guess on the similarity of two sets by randomly throwing darts on it? Let’s say after throwing 10 darts we know that 6 of them landed in the intersection. What would you guess that the similarity of the two sets are? Let’s say after throwing 40 more darts, we know that 30 of the total 50 throws landed in the intersection. What would your guess be now? Are you more certain about your guess? Why?

Ponder about this for a little bit and keep this picture in mind throughout reading this post. This is, in essence, the basis for the MinHash algorithm.

In the previous paragraph, we have alluded to the fact that it’s possible to approximate the Jaccard similarity between two sets. In order to see why that’s true, we need to rehash some of things we’ve said, mathematically.

Let’s replace the elements with the symbols “-“ and “+”, denoting if an element appears in the intersection or not.

If we repeat the random draw multiple times and keep track of how many times a “+” type came up versus a “-“, we can estimate the parameter \(p\) for \(X\) by maximum likelihood estimation (MLE):

The code below will simulate the process a 30 times and empirically compute the similarity.

The code above implements the same process that I described before, but instead of randomly picking an element, it is shuffling the elements in the union and picking the first element. If you run this, you should similarly get something that is close to \(0.5\).

We have shown that it’s possible to approximate Jaccard similarity for a pair of artists using randomness but our previous method had a significant issue. We still needed to have the intersection and the union of the sets to estimate the Jaccard similarity, which kind of defeats the whole purpose. We need a way to approximate the similarities without having to compute these sets. We also need to approximate the similarities for all pairs of artists, not just a given pair. In order to do that, we’re going to switch our view of the data from sets to a matrix. 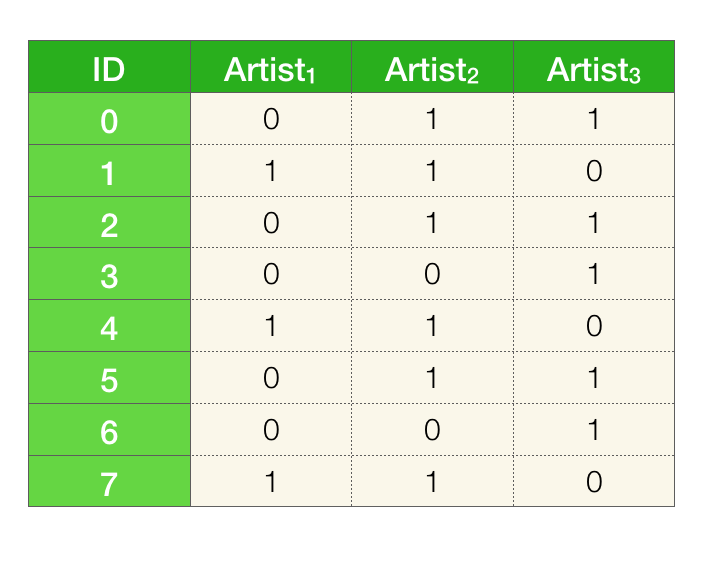 The columns represent the artists and the rows represent the user IDs. A given artist has a \(1\) in a particular row if the user with that ID has that artist in in their listening history 2.

Going back to our main goal, we want to reduce the size of the representation for each artist while preserving the Jaccard similarities between pairs of artists in the dataset. In more “mathy” terms, we have a data matrix \(D\) that we want to encode in some smaller matrix \(\hat{D}\) called the signature matrix, such that \(J_{pairwise}(D) \approx \hat{J}_{pairwise}(\hat{D})\)

The first algorithm I will be describing is not really practical but it’s a good way to introduce the actual algorithm called MinHash. The whole procedure can be summarized in a sentence: shuffle the rows of the data matrix and for each artist (column) store the ID of the first non-zero element. That’s it!

Let’s go through one iteration of this algorithm:

We have now reduced each artist to a single number. To compute the Jaccard similarities between the artists we compare the signatures. Let \(h\) be the function that finds and returns the index of the first non-zero element. Then we have:

And the Jaccard similarities are estimated as 3:

Why would this work?

To understand why this is a reasonable thing to do, we need to recall our previous discussion on approximating the Jaccard similarity. We were drawing elements from the union of two sets at random and checking if that element appeared in the intersection. What we’re doing here might look different, but it’s actually the same thing.

Let’s go through an example together with sets \(\text{artist}_{1}\) and \(\text{artist}_{2}\). I’ve highlighted the relevant rows using the same definition for the symbols “+” and “-“ as before. We have an additional symbol called “null”, these correspond to elements that are in neither of the selected artists. The “null” type rows can be ignored since they do not contribute to the similarity (and they are skipped over in the algorithm). 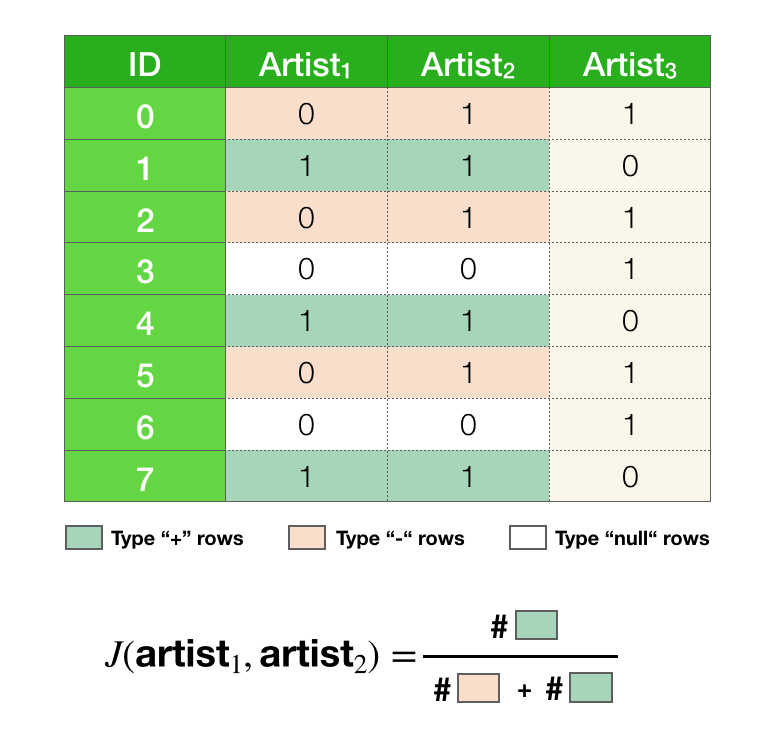 If we think back to our example with sets, this question should be easy to answer. All we have to realize is that, encountering a “+” before a “-“ is the exact same thing as randomly drawing a “+” in the union, which we know has a probability that is equal to the Jaccard similarity.

The same argument holds for any pair of artists. The most important take away here is that if the Jaccard similarity is high between two pairs of sets, then the probability that \(h(\text{artist}_{i}) = h(\text{artist}_{j})\) is also high. Remember, throwing darts at the diagrams? It’s the same intuition here.

Now going back to our example. With a single trial we have the following estimations. 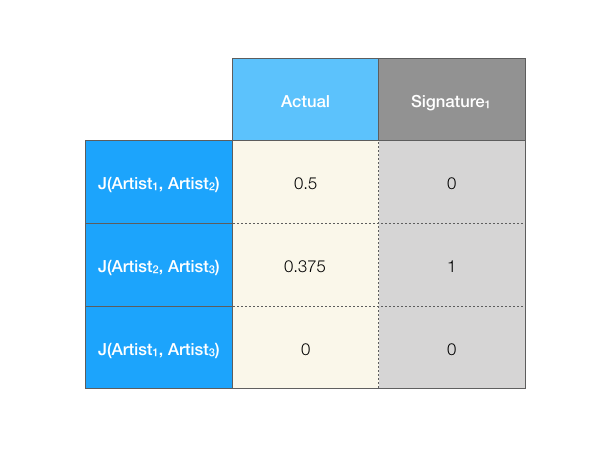 Where \(h_{m}\) is a function that returns the first non-zero index for iteration \(m\).

The animation below shows the process of going through 3 iterations of this algorithm:

Computing the Jaccard similarities with the larger signature matrix:

That’s much better. It’s still not exactly the same but it’s not too far off. We’ve managed to reduce the number of rows of the matrix from 8 to 3 while preserving the pairwise Jaccard similarities up to some error. To achieve a better accuracy, we could construct an even larger signature matrix, but obviously we would be trading off the size of the representation.

If you want to play around with this algorithm, here’s an implementation in Python using Numpy:

Shuffling the rows of the data matrix can be infeasible if the matrix is large. In the Spotify example, we would have to shuffle 271 million rows for each iteration of the algorithm. So while the algorithm works conceptually, it is not that useful in practice.

Although it’s not a necessary for the range of the hash values to be the same as the indices, let’s assume for the sake of this example that it is. Then you can think of these permutations as, where the row would have landed if we actually randomly shuffled the rows. For example if we had some hash function \(h\) and applied it to row index 4:

The way you can interpret this is, the row at position 4 got moved to position 2 after shuffling.

We’ll be applying these hash functions to the rows of our toy dataset. Since the number of rows \(m = 8\) is not a prime number we chose \(p = 11\). As I’ve mentioned before, the values of the hash function need not be in the same range as the indices. As long as each index is mapped to a unique value, the range of the values actually makes no difference. If this doesn’t make sense to you, let’s unpack the example we have. In this case, our hash functions will produce values in the range \([0, 10]\). We can imagine expanding our dataset with a bunch of “null” type rows so that we have \(p=11\) rows. We know that the “null” rows don’t change the probability of two artists having the same signature, therefore our estimates should be be unaffected. 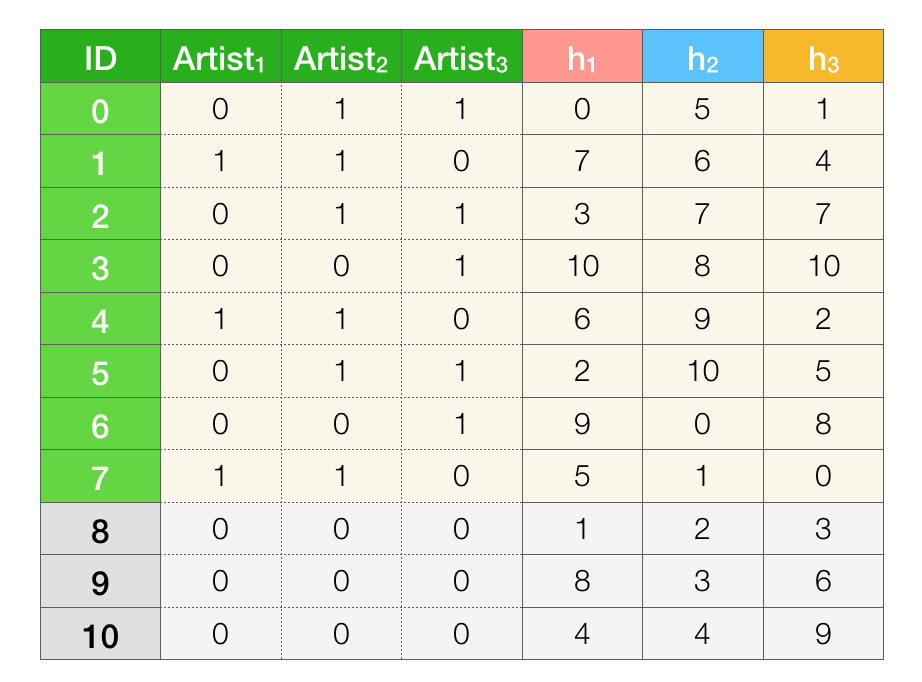 Since each hash function defines an implicit shuffling order, we can iterate over the rows in that order. As an exercise, iterate the rows in the defined orders of each hash function. For each column (artist) store the index of the first-non zero element. Then to compute the Jaccard similarities, compare the stored values the same way we did before. 4

The MinHash algorithm is essentially doing the same thing but in a more efficient way by just making a single pass over the rows.

When the algorithm terminates the signature matrix should contain all the minimum hash values for each artist and hash function pair.

The video below is an animation that simulates the algorithm over the toy dataset. Watching it should hopefully clear up any questions you have about how or why the algorithm works.

Now with this algorithm we can reduce all of the artist representations to smaller sets. If we use \(k\) hash functions we will have a signature of size \(k\) for each artist. This means that the time complexity of comparing two sets (artists) is now \(O(k)\), which is independent of the size of the original sets.

Using the MinHash algorithm, we can reduce the computational complexity of computing similarities between pairs of artists but there is still one more issue. In order to implement the recommendation feature we still need to compute the similarities between every pair of artists. This is quadratic in running time, if \(n\) is the number of artists, we need to make \({n \choose 2} = \frac{n(n-1)}{2} = O(n^2)\) comparisons. If \(n\) is large, even with parallelization, this will be a horribly slow computation.

We’re in luck because there’s another ingenious method called Locality-sensitive hashing (LSH) that uses the minhash signatures to find candidate pairs. This means that we’ll only have to compute the similarities for the candidates, rather than for every pair. I’ll write about LSH in the next post. Until then,

If you have any questions or you see any mistakes, please feel free to use the comment section below.